It’s Black History Month and we’re taking a few moments to learn more about Black History in relation to food, farming and food justice. We’re putting together a weekly list of resources—books, articles, reports, interviews and talks—that cover a range of issues that we need to think about as we move forward.

Read about about the contributions of African-heritage people to sustainable agriculture and the fight for Land Justice. Listen to what Regina Bernard-Carreno has to say about the underlying racism of the American food system. Watch a short NBC documentary about institutional racism that Black farmers face in Louisiana to this day. 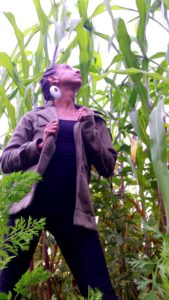 Black Kreyol farmer and founding co-executive director of Soul Fire Farm, Leah Penniman’s book is part how-to guide for historically disenfranchised communities to establish dignified relationships with food and farmland and part-history lesson and reflection that takes us through the distinct, technical contributions of African-heritage people to sustainable agriculture, stories of African American resistance towards Black Food Justice and Soul Fire Farm’s own journey towards becoming one of the country’s leading food justice organizations. All proceeds from the book will go towards scholarships for black, Latinx, and indigenous farmers to attend a training program at Soul Fire Farm.

It’s impossible to move forward in our fight for a just food system without addressing the history of land dispossession upon which it was built. Resistance is part of  Land Justice: Re-imagining Land, Food, and the Commons, a collection of essays edited by Justine M. Williams and Eric Holt-Giménez. The book includes a collectively-authored section on Black Agrarianism, which details the long history of land dispossession among Black farmers in the southeastern US, as well as the creative acts of resistance they have used to acquire land and collectively farm it.

Reportage: What Happened to All the Black Farmers? NBC Left Field

The number of Black farmers in America has been steadily declining since the 1920s; they make up less than 2% of farmers today, when they once accounted for 14%. This NBC documentary follows fourth-generation sugar cane farmer Wenceslaus ‘June’ Provost Jr. as institutional discrimination across the industry slowly puts his farm out of business. Through his story, we also learn about the history of systemic racism in the sugarcane farming in Louisiana and the 1999 Pigford lawsuit, a class-action lawsuit brought against the USDA for alleged discriminatory practices against Black farmers.