Worker Organizing in the Era of ICE Raids

The first plank of our Platform for Real Food calls for dignity for food all workers and their families. Brandworkers, a member organization of HEAL, is a worker-led organization that is moving the solutions in our Platform forward by organizing the people who work in New York City’s food production industry.

Running through the 5 boroughs—from Queens all the way to Brooklyn— is a gigantic industrial corridor of local food manufacturing workers. They’re making hummus, tortillas, dumplings, spices, bread, all for the gourmet grocery stores and farm-to-table restaurants in Manhattan. Eaters in Manhattan are buying these products that our members are making in these factories.

Brandworkers organizes workers that make food in these factories. Through their campaigns against Amy’s Bread and Tomcat Bakery they are fighting to increase labor protections for workers and end deportations of undocumented workers. They are also preparing these workers and their families to contend with a new threat – the ongoing raids from Immigrations and Customs Enforcement (ICE). ICE has bred a climate of fear and trauma among the hard working people who keep New York’s food industry running at its current pace, and organizing workers at this crucial time presents food labor organizers like Brandworkers with a new set of challenges. 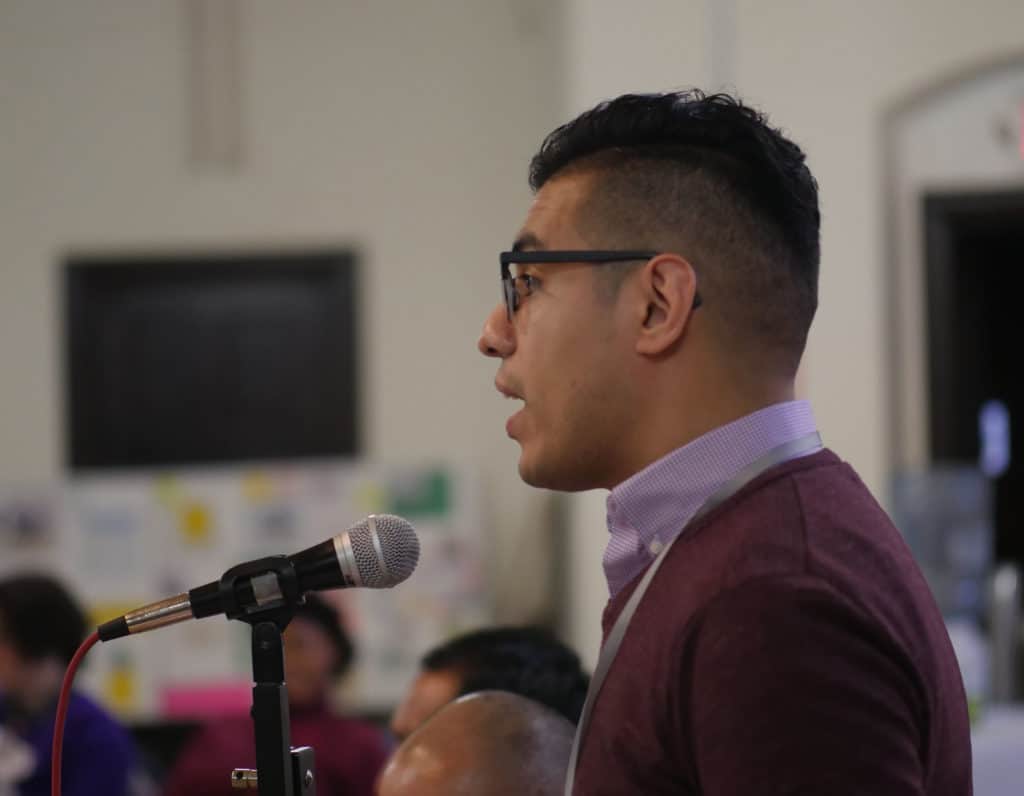 What are Brandworkers’ current campaigns?

We have two flagship campaigns at Brandworkers. One is Amy’s bread and the other is the Tomcat Bakery campaign. To our knowledge, we are the only workers center in the country that is specifically devoted to organizing and building up the power of local food manufacturing workers – specifically those who are making products for the local sustainable organic market, which in New York City is a gigantic and growing sector. Capitalism for all of its inventiveness and innovations, hasn’t yet figured out how to get a fresh warm loaf of bread from the US-Mexico border or Southeast Asia to central Manhattan. They’re probably working on it though! But until then, these markets have brought the sweatshops to us.

How are the two campaigns different from each other?

For most part, the Amy’s Bread campaign has the characteristic of a modern workplace committee building, union organizing drive. We have Brandworkers’ organizers that are knocking on doors, having one-on-one’s with workers and doing their best to identify leaders and get people together so they can fight for a fair workplace.

The Tomcat campaign on the other hand has the characteristics of a corporate campaign because of the circumstances under which we are running it. Much of the base that we had inside of Tomcat was exited out of the factory because of the I-9 audit. So the Tomcat campaign is about workers who no longer work in their factory. Much of the work that we are doing there is about how we can put pressure on the Tomcat brand itself—actions to educate customers for example. Our demand here is that Tomcat adopt policies that protect immigrant workers who are still working for them and that they offer the workers (Brandworker members) that were excited a just and dignified severance. Tomcat does have a union with the bakers.

Earlier this year, ICE raided food processing plants in Mississippi, arresting 680 mostly Latin-American workers. ICE and immigration enforcement has been a source of trauma and worry for many food workers and their families. How has this impacted your work?

It’s significant. For starters, it exited out our base at Tomcat and it’s embroiled us in what is now approaching a three year campaign with them. ICE has always been a villain but it has been particularly wreaking havoc since November 2017. Prior to that, it was just the I-9 audit which functions to do the exact same thing as an ICE raid but without kicking down doors.

With respect to our campaign, Tomcat bakery collaborated with ICE. Tomcat knew about the audit but made a conscious decision not to warn their workers. If society had any justice, that would be labeled as an evil thing to do. But in a capitalist society, it’s okay to protect your profits even if it means letting people know so they can prepare themselves and their families. If they had been warned, the workers could get a lawyer, get childcare and do what’s safe for them.

But Tomcat was unwilling to disrupt their production cycle. In our society, that is the rational decision. And that’s the decision companies all over the United States are making in the face of these raids.

This group of workers at Tomcat, for better for worse, is the only group of workers that we know of that have managed to stick together and organize following an I-9 audit that led them to lose their jobs. They have made a decision to fight for their rights despite all of the social pressure to go into hiding and run away scared. A lot of that pressure comes from like well-meaning allies that are saying “you don’t want to be in the newspaper” and “maybe should keep your head down” to be safe. So for this group of workers to stand up and for us to win this campaign, would be like a really profound example of what immigrant workers can do in the face of ICE now.

That’s why we have invested a ton of time resources to see this campaign through—it’s that important.

What typically happens to workers after an ICE raid?

In 2017, 800 workers were arrested in an audit at Cloverhill Bakery in Chicago and they just disappeared. Some of them may have moved to other jobs that paid maybe half of what they were getting at Cloverhill where they may have had years of seniority and raises built up. And then you end up going to a new bakery or workplace and you start from scratch. So they are probably making a lot less money. Some of them may have gone back to their country. But we just don’t know because they were not organized. Ironically, these workers were baking buns for the most visible corporate logo in the world—McDonalds. Then you have 7/11 audits in early 2017 that affected hundreds of workers. We don’t know what happened to those workers either.

The companies get a new batch of workers and move on. They are not being held accountable for disposing of their workforce and upending people’s lives. They’re actually like profiting off of the destruction of immigrant buys. And that’s why we have to hold Tomcat accountable.

Have the workers who were at Tomcat moved on to other jobs even as they organize against their former employer?

Yes, but they’re not earning anything close to what they were getting at Tomcat. And the amount of trauma and hurt that these people have experienced over the past two and a half years is tremendous.

Why is this campaign important to the larger food and labor movement?

Tomcat is owned by a company called Bakewise, which is owned by the Yamazaki Baking Corporation whose annual revenue was 9.5 billion dollars in 2016.

That they are holding out on adopting policies that would cost nothing and have no impact on their margins is an indication that this fight is not really about the money. The National Employment Law Project and National Immigration Law Center has this report called ‘What to do when immigration comes to your workplace’. It’s an employer focussed set of policies—it costs no money at all to adopt these. Their reluctance to do so is an indication that this fight is really to avoid setting a precedent that companies can be accountable for their collaboration with ICE.  Because then other immigrant workers in different parts of the country are going to say that their company should also do the same.  Nothing is more dangerous to hegemonic power than the threat of a good example—of people standing up to power, fighting and winning.

EXPLORE THE FULL PLATFORM
Previous Food, Race and Labor: A brief explainer
Next Here’s how you can support farmers and food workers through COVID19

Department of Labor Heads Scalia and Sweatt Must Resign!