Students Demand Cafeteria Worker Protections During COVID-19: Here’s how you can join them!

Global Pandemic Highlights Systemic Flaws in the Food Service Industry; but students are fighting back!

We are living through two global crises exacerbated by capitalism, racism, and industrial agriculture: climate chaos and COVID-19. These crises are unveiling what we already know—that our food system is flawed at the core, and food and farm workers, small-scale producers and communities experiencing food apartheid are burdened first and worst.

With college campuses across the country closing doors for the year, workers and students find themselves in an especially vulnerable position. A majority of cafeteria workers have lost their livelihoods, while students are facing immediate crisis through food insecurity after being required to leave campus during quarantine without full refunds of meal plans and housing.

Motivated by shared values and an unapologetic desire for justice along the food supply chain, students and supporters with Uprooted & Rising (UNR) are organizing to support workers, students and food producers during the COVID-19 crisis, while exposing the ways in which three multibillion dollar food service companies—Aramark, Sodexo, and Compass Group (the “Big 3”)—are perpetuating a system of harm, hidden behind campus cafeteria doors. UNR is a super majority Black, Indigenous and people of color movement to end higher education’s support for Big Food corporations and white supremacy in the food system. They launched #WorkersOverKickbacks as an effort to amass support for cafeteria workers being laid off at campuses all over the United States.

Cafeteria workers are already among the lowest paid in the food industry, and many have now been thrown into immediate crisis. Some have been laid off, while others are continuing to work, often in high-risk working conditions—access to personal protective equipment is scarce and hazard pay is not a requirement. They are facing unsafe working conditions, lost wages, and lack of access to healthcare. A 2018 study from researchers at Temple University found that 17 percent of over 85,000 students they surveyed had been without housing within the past year, and 45 percent had experienced food insecurity in the past 30 days. The lack of resources available to address student health and wellbeing during COVID-19 is only intensifying the food and housing insecurity that many students already face.

While the CEO’s of Big Food companies are prepared to weather the COVID-19 storm—like John Zillmer, CEO of Aramark who makes $1,300,000 annually — the average Aramark cook makes $27,070, just dollars above the poverty line and certainly not enough to build an abundant emergency savings account in case of global pandemic.

What role do the folks making the most money at the top of the cafeteria food system play?

The Big 3 — Aramark, Sodexo, and Compass Group — control the vast majority of contracted dining operations at colleges and universities, stadiums and hospitals. These companies have made billions of dollars through kickbacks — rebates won through exclusive deals with Big Food manufacturers, like Tyson Foods and Cargill. These companies keep it cheap through mass exploitation of land and labor – low wages for workers, low quality ingredients, and monoculture. Some of the companies that the Big 3 exclusively sources from are directly responsible for the burning of the Amazon Forest, which has displaced indigenous communities and caused irreversible climate damage. If that wasn’t bad enough (it is), kickbacks also lock out independent family farmers – they can’t compete with Big Food’s rebates.

That’s why people are taking action to expose the flaws in our food system — and you can too.

On April 22, students, community organizers and supporters with Uprooted & Rising (UNR) took action to send a clear message that the Big 3 multibillion dollar corporations must take responsibility for workers, students, and food producers during the crisis created by the global pandemic. 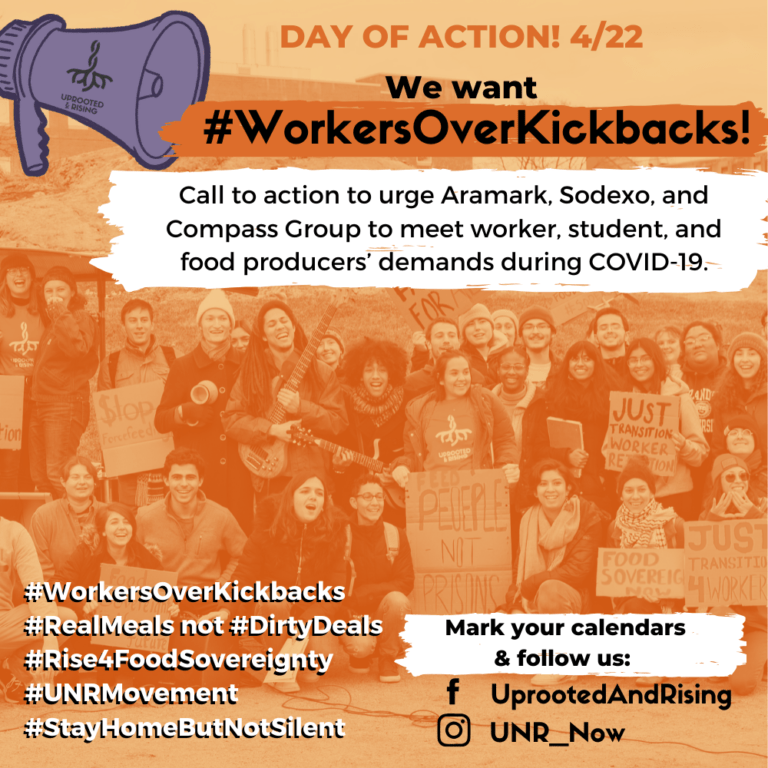 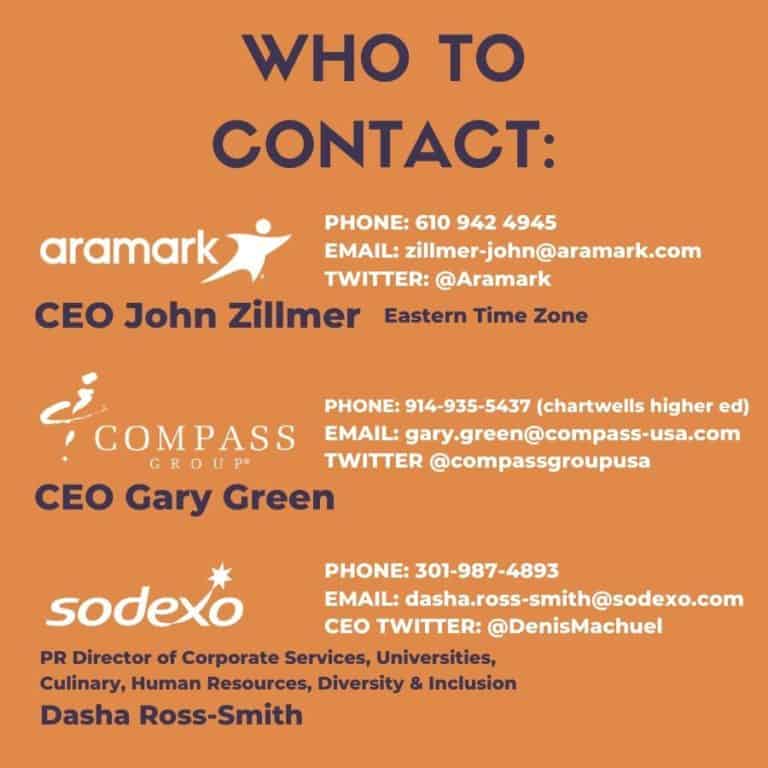 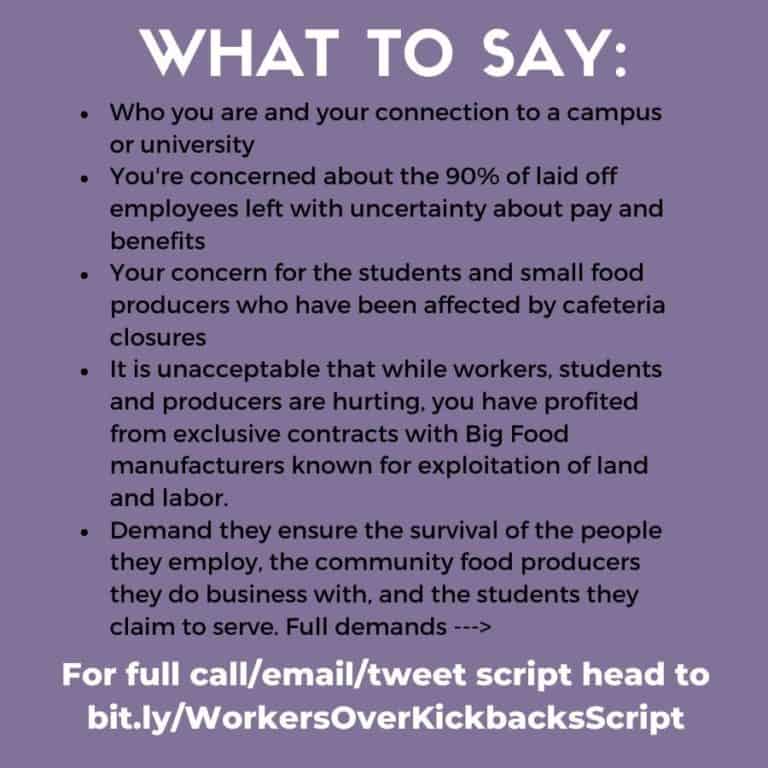 Through phone calls and tweets directed at the companies, people called on the Big 3 to take responsibility for the workers they have employed, the community food producers they work with, and the students they claim to serve. They are demanding that Aramark, Sodexo, and Compass Group:

In addition to sending a unified message to the Big 3 that they must put worker and student wellbeing before profits, the Day of Action brought student and community organizers around the country in connection with each other. While the #WorkersOverKickbacks demands are meant to address immediate needs during the COVID-19 crisis, these folks intend to continue to build off of these relationships and momentum to organize around the Real Meals Campaign demands moving forward.

The Real Meals Campaign and Uprooted and Rising remain committed to building a food and farming system rooted in racial justice and equity that supports and nourishes our communities, farmers and fishers, and workers. To join the call for #WorkersOverKickbacks, you can sign the national petition here. 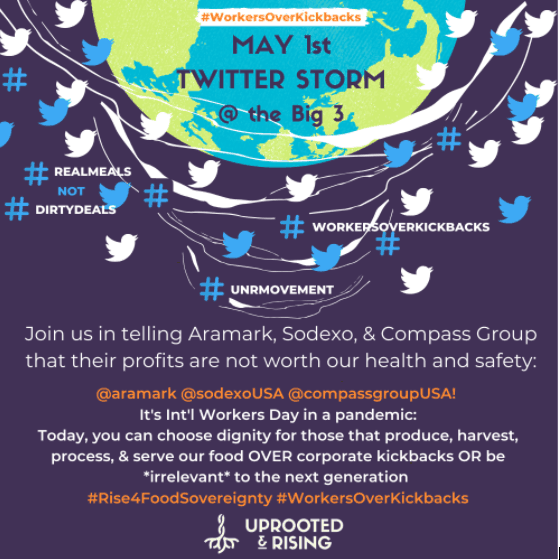 HEAL’s Statement on the DACA Recision