In recent months, we have witnessed some of the most devastating consequences of Big Food’s business practices. From the intentional burning of the Amazon rainforest by industrial animal agriculture companies to the ICE raids at a Mississippi poultry plant – it’s clear that the current system is only working for a few corporate CEOs, while dramatically harming BIPOC (Black, Indigenous and People of Color) folks, our communities, workers, and the Earth.

On October 21, farmers, fishers, students, food-chain workers, and community activists came together at Aramark’s headquarters in Philadelphia to deliver a petition with over 100k signatures and to demonstrate in the streets with a flash mob – all to demand that Aramark drop Big Food and invest in Real Meals. 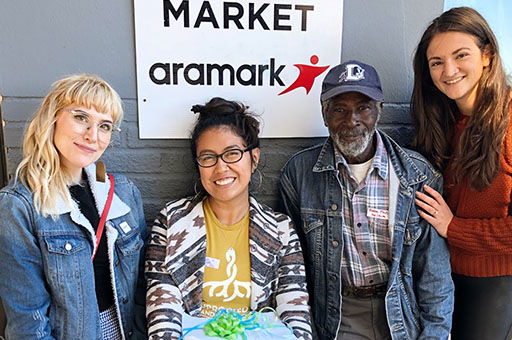 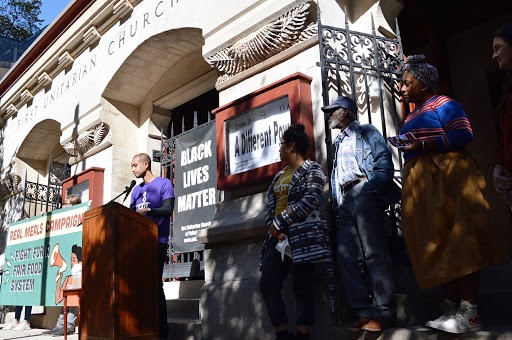 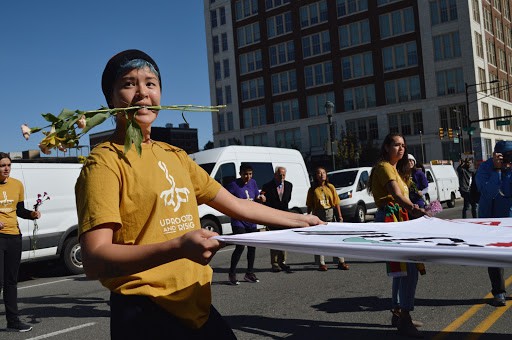 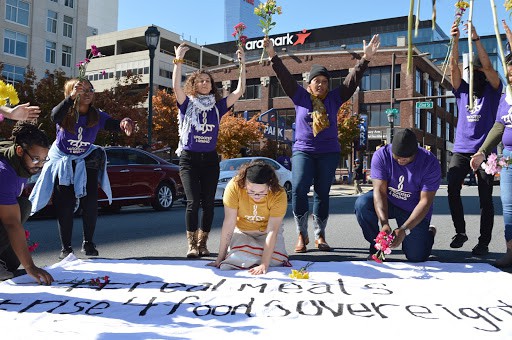 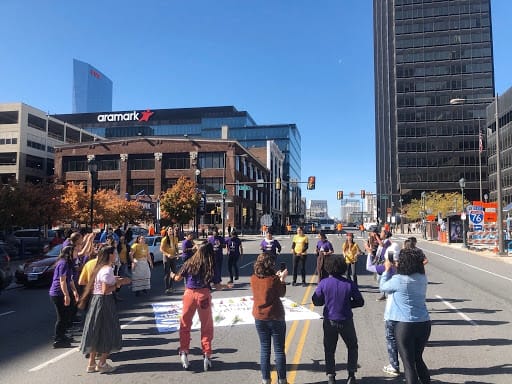 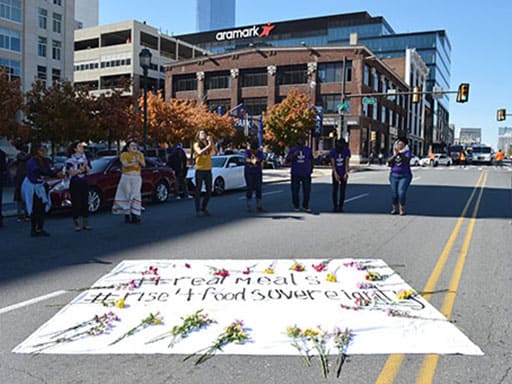 Aramark, one of the biggest food service management corporations, invests in a harmful system that locks in Big Food corporations and locks out small-scale family farmers like Phillip and Dorathy Barker of Osusanya farms in North Carolina. Like so many other family farmers, the Barkers have been unable to sell their products in lucrative local higher education markets, largely due to Aramark’s network of deals that favor corporate food giants over small farmers and producers.

For black and brown farmers, Aramark’s market has not been a good place. We are asking Aramark to use its power to invest in infrastructure that supports independent black and brown family farmers. Without some change in the way Aramark does business, the playing field will never be level
– Philip Barker, Farmer & Real Meals rep

Aramark makes its money by buying food from giant food corporations – some of which are the same corporations burning the Amazon rainforest and displacing indigenous people – and selling that food in cafeterias at universities, prisons, hospitals, and other institutions around the United States.

To draw attention to Aramark’s role in supporting Big Food and urge the food service giant to adopt the Real Meals Campaign’s demands, the Campaign hosted a press conference where black farmers, fishermen, university students, and local and national community activists who have been directly harmed by Aramark’s unjust business practices shared their stories and called on Aramark to do better.

As a student, I have seen firsthand how Aramark signs contracts with universities without the input of students who have to eat the food Aramark provides. Aramark upcharges students — many of us whom are food insecure and struggling under a ton of debt — for low-quality food. And they mistreat campus workers, some of whom are students themselves. That is why we are here today — to tell Aramark to stop exploiting students, workers, and producers for profit!
– Ofelia Sanchez, student at the University of South Florida

After the press conference, a BIPOC-centered flash mob organized by Uprooted & Rising broke out and shut down a portion of Market Street in front of Aramark’s Philadelphia headquarters. The performers danced in resilience as Black, indigenous, and people of color represented the folks most marginalized from decision-making in our food system. White allies acted as peace-keepers to block traffic. Dancers formed a spiral and circles to represent sacred symbols in nature and sacred shapes that their ancestors have used to point towards the four directions and to the continuity in the cycle of life.

Those who signed the petition know that Big Food is not sustainable and #RealMeals that nourish us all are desperately needed. Petition signers are calling on Aramark to:

Last year, Aramark made 14.6 billion dollars. In a world where money equals power, that’s a lot of power. But when we come together across sectors, we create a different, more sustainable type of power – people power to build a system that supports and nourishes our communities, farmers, workers, fishers – and addresses problems around racial injustice and climate chaos, rather than contributing.

To join the call for #RealMeals, you can add your name to the petition or amplify the call on social media. Your voice matters.

SoPL is Timely and Necessary: Reflections on Session 6

Our Vision & Path: Reflections on Session 5 of HEAL’s School of Political Leadership

4 Ways to Disrupt the Status Quo this International Workers Day