Last year was a big year for our movement! 2019 ushered in the most racially and ethnically diverse US Congress alongside many black, indigenous and people of color (BIPOC) weighing in on important food and farming conversations at all levels – from a ban on the harmful chlorpyrifos pesticide in California to the importance of funding for heirs property at the federal level. This gives all of us a lot to look forward to in 2020! However, if you are working in food and agriculture or simply planning your next meal, you will have to navigate a host of challenging federal policies that have shaped the way our food and farm systems function. These policies have been developed to prioritize profit over people and the planet. Everyday we are operating within the legacy of a system that was based on theft of land, labor, and wealth.

HEAL’s vision for our School of Political Leadership (SoPL) is rooted in our acknowledgement of this history and context. When it comes to the food and farming system, policy determines which farmers are afforded opportunities and resources, which regions and communities have easy access to fresh and healthy produce, what farming practices are adopted, and how land is used. HEAL launched SoPL with the goal of having these decisions be shaped by all the communities that are impacted by them, and this includes BIPOC, poor and working-class communities from rural towns, tribal nations, urban landscapes, and everyone in between. 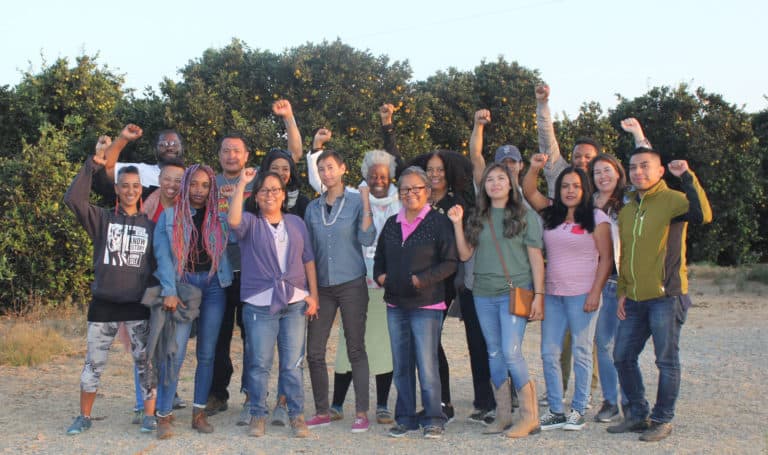 It’s with this goal in mind that we convened the first session of 2019-2020 School of Political Leadership in Lindsay, CA, alongside local community organizers affiliated with Californians for Pesticide Reform and Coalition Advocating for Pesticide Safety (CAPS), including Angel García  (a SoPL 2017-2018 alum!). Over three days, we exchanged ideas and shared meals with local residents, advocates, farmworkers, and leaders, and learned about the reality of living and raising families in California’s Central Valley where the food system is dominated by corporate agriculture, large scale landowners, and entrenched political players. Our three incredible SoPL teams (the Urban Agriculture and Equity team, the Diné Food Sovereignty team, and the New Food Economies team) also engaged deeply with one another and began to develop a shared understanding of each others’ communities and their vision for a food and farm system through activities such as an interactive movement mapping exercise.

So why did we pick Lindsay, Tulare County for our inaugural session?

First, California’s Central Valley occupies a critical place in the country’s current food system – the region is home to some of the largest industrial farming operations in the country like Sunkist and Land O’Lakes. For example, Fresno is the second largest food hub in the country! We got to see first hand the immense scale of corporations like these: the seemingly never-ending rows and fields of monoculture crops, and the adverse impacts of this type of farming  to the land. We also engaged the residents, farmworkers, and organizers who are living, working and raising families amidst these huge agri-businesses.

Second, Lindsay is also home to incredible community organizers like Angel García and Fidelia Morales who showed us how it is possible to leverage people power against the money and influence of consolidated, corporate agriculture and win! A case in point is the fight for pesticide regulation. 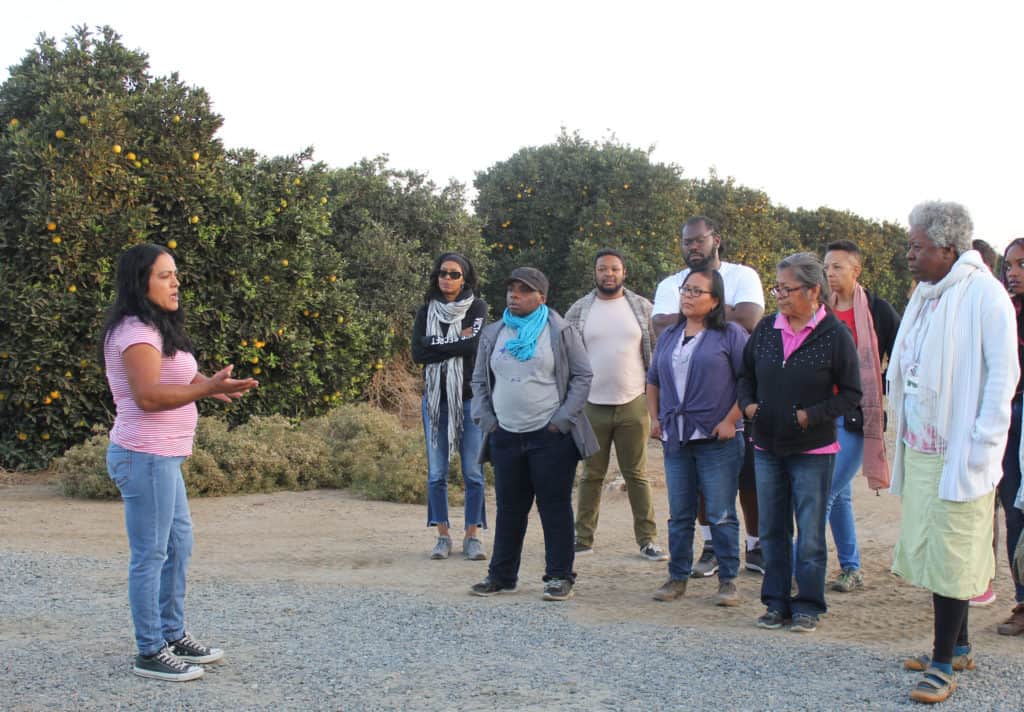 According to Angel, Tulare County ranks among the highest in the country for pesticide use, and the impact of this large-scale pesticide use is felt by farm workers, local residents and their families. We spent an evening with Fidelia Morales, a resident organizer, who talked about raising a family under constant risk of pesticide exposure. Her experience illustrated how the system is locked in favor of large scale land owners and agribusiness. 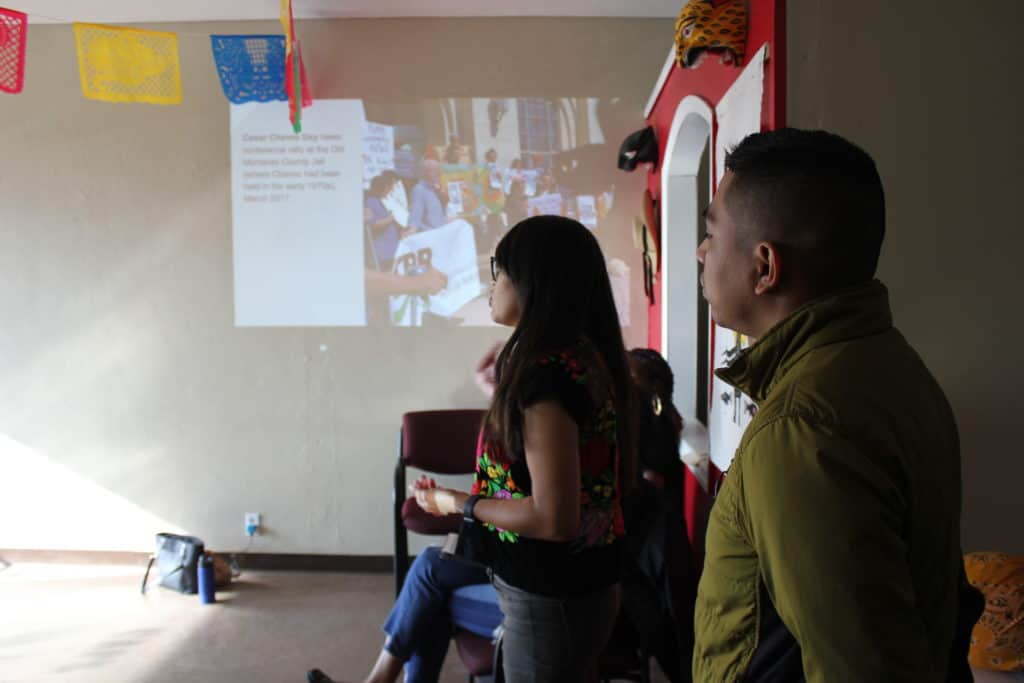 We also heard from Angel and Sarait Martinez, also from Californians for Pesticide Reform, about how organizations like theirs – along with residents organized across rural communities – pressured the State of California to ban the sale of the pesticide chlorpyrifos, which has been linked to brain damage and significant health issues in children.

Fred and Elva Beltran with the HEAL SoPL crew!

Local organizers Fred and Elva Beltran, talked to us about the 2014 East Porterville drought and the compounded challenges that unincorporated communities face, and the efforts they led to ensure their community had access to water.

Our first 2019-2020 SoPL session was meaningful for many reasons, but meeting these amazing leaders, learning from their work, and watching the SoPL teams lay the foundations to build solidarity with them was an especially great example of what building collective power looks like. As with the first SoPL cohort, this year’s participants include teams of farmers, community activists, organizers, educators, and advocates working in diverse communities across the United States. Some are established leaders in their own communities, while others are getting ready to drive campaigns, reach key decision makers, and implement critical solutions to transform the destructive elements of our food and farming system.

Our vision for this year’s School of Political Leadership teams is that they are able to craft campaigns in conjunction with their communities; and step into their full potential as food and farming change-makers.

We need leaders who embody lived experience, can lead conversations, drive action, and create lasting impact. And, most importantly, we need people who are accountable to the communities they come from to actualize a transformative food and farm system.

And with that, we’re looking forward to further relationship-building, power mapping and campaign development in the southeast for our second SoPL session. Stay tuned for more updates!