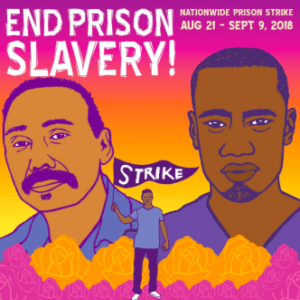 Yesterday, prisoners across the United States launched a nation-wide strike demanding an end to prison slavery, poor living conditions, and death by incarceration. The strike began on the death anniversary of George Jackson, a former Black Panther and a leading voice of the 1970s prison movement, and is expected to last for 19 days, ending on the anniversary of the Attica prison uprising.

The strike was called in response to the death of seven incarcerated individuals and a prison-wide lockdown resulting from inhumane living conditions at Lee Correctional Institution in South Carolina in April.

In a statement made by members of the organizing group Jailhouse Lawyers Speak, ten demands were listed, including a call to end compulsory labor for meager wages, a widespread practice in the U.S. prison system that strike organizers call a modern form of slavery. The call demands “An immediate end to prison slavery. All persons imprisoned in any place of detention under United States jurisdiction must be paid the prevailing wage in their state or territory for their labor.” 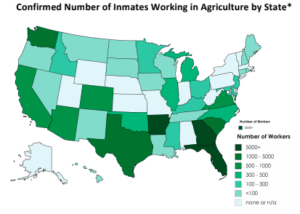 Over 30,000 incarcerated people work in farming or food-related positions, many making less than a dollar a day, often under difficult labor conditions. In some cases, these incarcerated workers are producing or preparing food for consumption in their prison facility, and in others, they are harvesting produce or manufacturing value-added products for profit-driven corporations. These practices are rampant across the prison system, in public and private prisons, including immigrant detention centers, and is a legacy of the U.S. slave economy.

The HEAL Food Alliance & Food Chain Workers Alliance are united in solidarity with incarcerated people who are courageously engaging in work stoppages and hunger strikes. We support the full demands of the prisoners (listed below) and call on our allies in labor, farming, and food justice to do the same.

Full list of Demands:
1.  Immediate improvements to the conditions of prisons and prison policies that recognize the humanity of imprisoned men and women.
2.  An immediate end to prison slavery. All persons imprisoned in any place of detention under United States jurisdiction must be paid the prevailing wage in their state or territory for their labor.
3.  The Prison Litigation Reform Act must be rescinded, allowing imprisoned humans a proper channel to address grievances and violations of their rights.
4.  The Truth in Sentencing Act and the Sentencing Reform Act must be rescinded so that imprisoned humans have a possibility of rehabilitation and parole. No human shall be sentenced to Death by Incarceration or serve any sentence without the possibility of parole.
5.  An immediate end to the racial overcharging, over-sentencing, and -parole denials of Black and brown humans. Black humans shall no longer be denied parole because the victim of the crime was white, which is a particular problem in southern states.
6.  An immediate end to racist gang enhancement laws targeting Black and brown humans.
7.  No imprisoned human shall be denied access to rehabilitation programs at their place of detention because of their label as a violent offender.
8.  State prisons must be funded specifically to offer more rehabilitation services.
9.  Pell grants must be reinstated in all US states and territories.
10. The voting rights of all confined citizens serving prison sentences, pretrial detainees, and so-called “ex-felons” must be counted. Representation is demanded. All voices count.

Previous Updates to the Real Food Standards: 4 Ways We Are Addressing Changes in the Food Landscape
Next Big News! We’ve Launched a New Campaign to Transform the Food Service Industry

9 Farmworker Organizations to Support on this Cesar Chavez Day