Last month, we made our way to San Francisco to listen to a panel discussion hosted by CUESA and HEAL members Real Food Media. Real Food Media’s Tiffani Patton moderated the panel and was joined by Janaki Jagannath, the former Coordinator of the Community Alliance for Agroecology (CAFA). Janaki, who is now a third-year law student at UC Davis has been working to secure environmental justice and health and labor rights for farm workers in Central Valley since 2014. Through her work in CAFA and beyond, she’s also been a champion of agroecological practices and soil-based solutions to the climate crisis.

Sara Tiffany, Senior Manager of Climate Smart Farming, at Community Alliance with Family Farmers, and Karen Leibowitz, Director of the  Perennial Farming Initiative joined Janaki as panelists. Thanks to these incredible leaders, we left feeling a little more empowered about finding solutions for the impending climate collapse. Here’s five solutions we brought back with us. 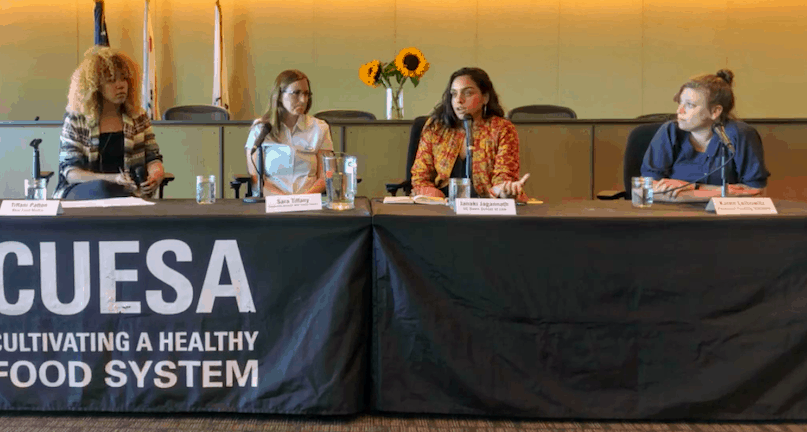 “Food can be an antidote to climate chaos”

Industrial agriculture involves mining the soil rather than farming it. And we’re paying a climate tax for it. This mode of production is at the root of the food systems role in perpetuating the climate crisis and breaking that cycle requires a complete transformation of the food system to one that can not only impede global warming but also act as a force of regeneration and carbon sequestration.

We know good food can cure many things, but good food can truly counteract the impacts of the climate crisis in strategic, measurable ways. We know because some of our members like Soul Fire Farm and Community Alliance for Agroecology are already engaging in agroecological practices and seeing small, but significant results like richer soil, increased biodiversity in the surrounding areas and improved water retention. These impacts also help us combat some of the destructive effects of a warming planet; as Karen Leibowitz pointed out, an environment with moist soil is more resilient in the face of forest fires. More importantly though their efforts remind us that if we can give the right people resources and power, we can work together to heal the planet.

Next time someone talks to you about the carbon footprint of your lunch, first, listen to them (because they’re probably right!) but also remind them that a larger food systems change could be an opportunity to put all that atmospheric carbon back where it can do us good—the soil.

Climate change, and climate activism is not new

Before melting ice caps, intense hurricanes and an alarming drop in biodiversity spurred a large number of people to become more climate conscious and join the climate fight; before the slow-food movement made the connection between food and the environment and before the Green New Deal began a nationwide discussion about radical, systemic solutions; small farmers and farm workers, and indigenous folk have been advocating more sustainable farming practices and environmental stewardship of the land for decades.

This is not surprising, as the same things that do harm to the soil and subsequently the environment, like chemical fertilizers and factory farms, also pose health and safety risks to local communities and farm workers. For instance, methane pollution caused by factory farms contribute to global warming, but the polluting impact of a factory farm is first felt locally, by its workers and those living in and around it.

While urban folks are only recently worrying about the fate of the planet, climate activism has a long history in many rural and indigenous communities. Today, these communities remain on the front lines of climate change, but more importantly, the agroecological practices they developed is a crucial part of the climate solution. As the country advances research and development on climate friendly practices, those who pioneered these movements should be able to share in the knowledge and partake in these practices.

If you’re wondering what these terms mean and what it has to do with climate change, you’re not alone. Gratefully, the panelists did a great job explaining what they meant and how they were different from each other. Here’s a quick primer:

Regenerative farming: The opposite of extractive farming, it’s a practice that aims to capture carbon from the atmosphere and store it in the soil; think lots and lots of compost, cover cropping, minimal tilling and, of course, absolutely no use of chemical fertilizers or other industrial techniques.

Agroecology: An approach derived from indigenous farming practices that links environmental, human and economic health while stewarding the land and natural resource base. But Janaki points out that it’s more than just that—it’s also a movement strategy, used by global organizations like Via Campesina. It involves continuously asking questions about how best to farm, but also building community power and holding political systems accountable, and all these parts of it need to be in action for it to work!

Vote with your VOTE

While transforming farming practices will greatly mitigate the changes associated with the climate crisis, and farmers must be empowered to transition to them, we can’t ask farmers to solve the climate crisis for us. We must remember one thing: farming is hard, even without the pressures of climate change. Small farmers and farm workers are vulnerable to economic pressure and health risks and should not be expected to take the financial risks to make this transition. Not without our support.

If you’re already ‘voting with your fork’, good for you, but don’t let yourself off the hook from engaging in actions that will make deep, systemic change. Talk to farmers at your farmers market, make an effort to understand the pressures faced by the folks who grow your food, vote for leaders that prioritize people and the planet over industry and profits, support policies that ensures investment in disadvantaged communities that bear the burden of climate change.

There’s no easy answer to what we can each do to but working together as a community the only way to benefit from the resilience of the planet, and the resilience and knowledge of the people that have been stewarding it.

If you’d like to host your own event that helps your community learn more about the role food can plan in climate justice, check out this organizing toolkit from Real Food Media.

SoPL is Timely and Necessary: Reflections on Session 6